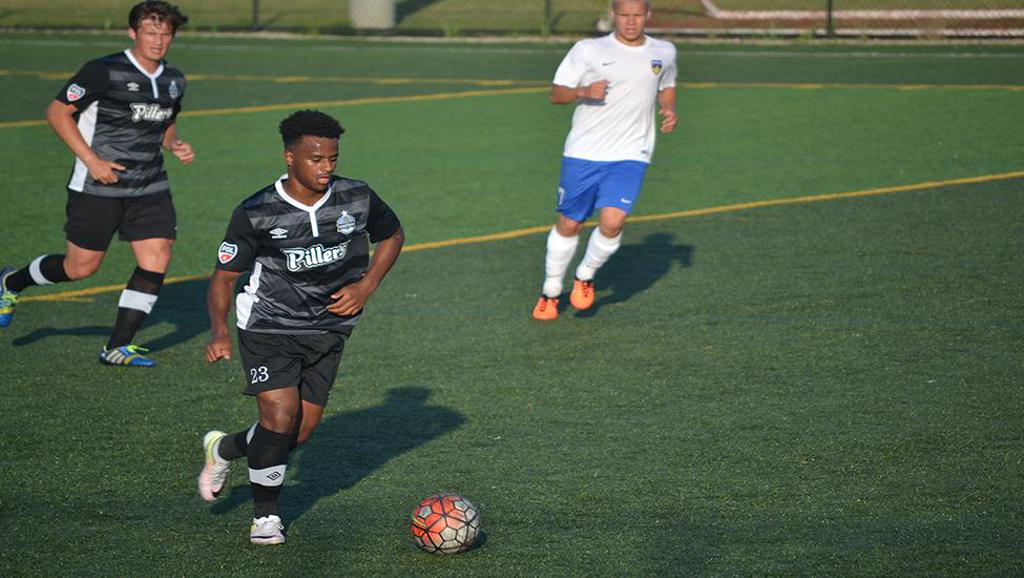 Waterloo, ON -  With the regular season winding down, K-W United is hopeful to wrap things up with the same grit they've demonstrated for the entirety of the 2016 season so far. Following a tough loss to rival team: the Michigan Bucks, K-W entered their third match against the TFC Academy with the determination needed to secure a hat trick of wins against the only other Ontario-based team.

Having faced TFC only a few weeks prior, K-W players were well aware that despite the fact that Toronto lost 6-0 to them in their season opener,  they were not willing to let that happen again.

In just the 5th minute of play, TFC landed the first goal of the match to take an early lead and put the pressure on K-W players from every angle. Having opened up scoring, Toronto would go on to make several more attempts on K-W's net only to be met by keeper, Jared Brown, who would not let another goal slide past him in the 90+ minutes that followed.

With a penalty kick declared for K-W, Jahsua Mills would step-up and successfully net the first goal of the game for K-W United, tying things up and providing the fuel to push harder.

From that 24th minute mark on, the match was nothing short of intense.

Entering half-time tied-up, K-W would spend the remainder of the game seeking chance after chance to get ahead of Toronto with an undeniable level of endurance. Despite their efforts throughout,  it would be the final minutes of the game that would prove most significant for K-W United.

The phrase down-to-the-wire an understatement, forward Sven Koenig and University of Waterloo player Mohamed Aborg would sink two back-to-back shots in the 89th and 90th minute respectively.  Finishing the match with the three goals they were hoping for, K-W took home their 9th win of the PDL season and their 3rd straight win over the TFC Academy with a final score of 3-1.

Man of the Match was awarded to Jahsua Mills for his tenacity throughout the game.

K-W will next take on the Pittsburgh Riverhounds (1-5-4) in their second last game of the regular season this coming Sunday at Wilfrid Laurier's University Stadium. Currently leading the Great Lakes division, K-W United will be looking to maintain that position over the course of their next two matches.

Can't make it to University Stadium on Sunday? Follow us on Twitter for live updates throughout: @KWUnitedFC