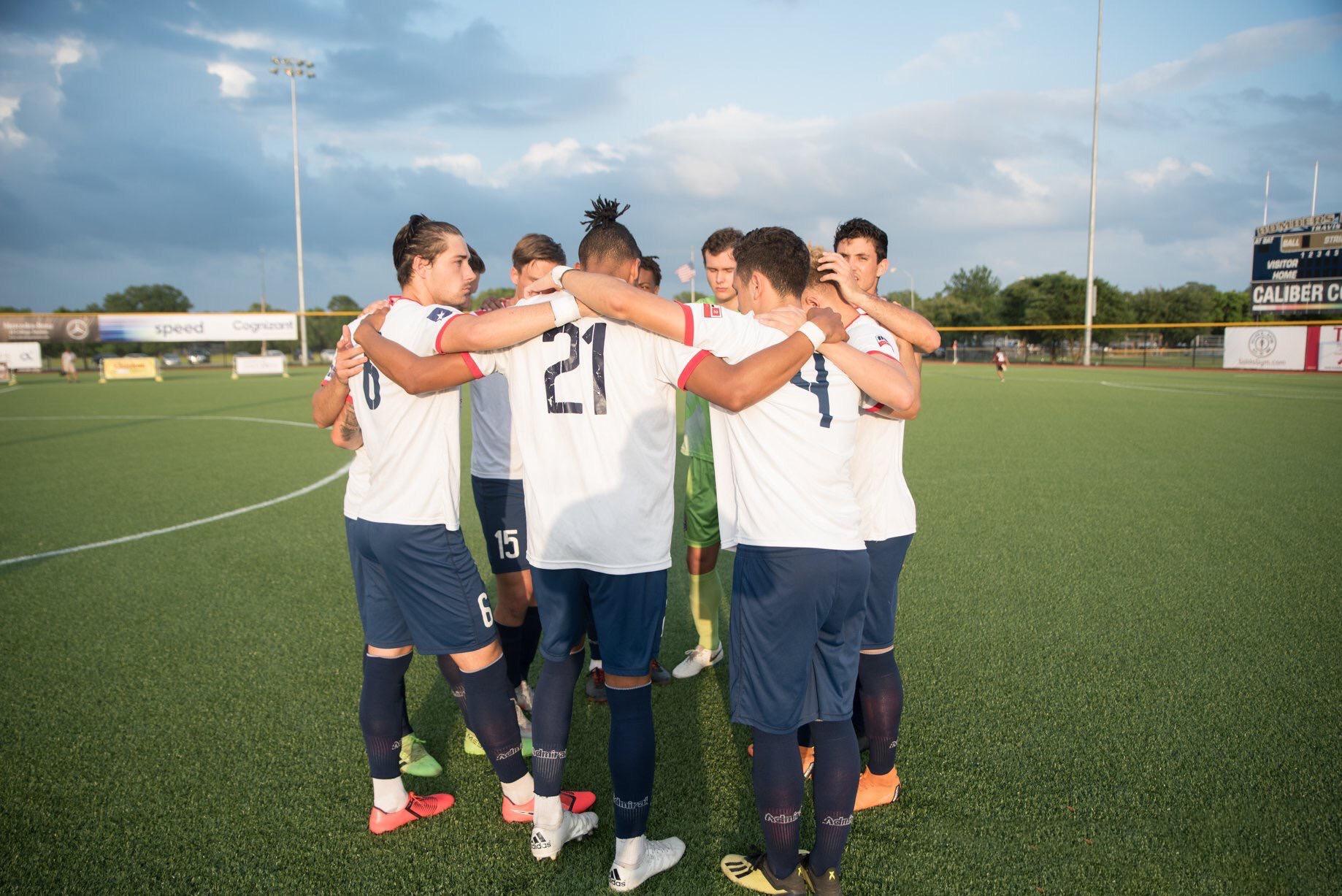 If you heard about a pair of English midfielders who pulled the strings for a team that scored 43 goals in 14 games and finished in first and second on the league’s assist chart, you wouldn’t think to look for that pair in southern Texas. But that’s exactly where Ollie Wright and Arthur Rogers ran the show for Corpus Christi FC this League Two season, spearheading the league’s second-highest scoring offense.

Both hailing from London and growing up addicted to soccer, Wright and Rogers came to the United States to continue playing the sport while pursuing an education. Rogers is cut from the cloth of the modern central midfielder, calm on the ball and skilled at breaking opposition lines with either his passing or his dribbling.

Wright was usually deployed a bit further forward by CCFC Head Coach Sebastian Giraldo, and is incredibly talented on the ball and adept at unlocking defenses with his creativity. Both are dangerous when lining up a shot, whether from within the box or from distance. Giraldo relied upon the dynamic duo to make his demanding, attack-oriented style work, and it made the Sharks one of the league’s most exciting teams to watch.

“Ollie and Arthur have outstanding individual skills and the vision to break even the highest pressure through split-second sharp decision making,” said Giraldo. “The fact that they led all of USL League Two in assists is a tribute to how they enjoyed themselves and were able to express their creative ideas in our system.”

Giraldo’s tactical approach was based on keeping possession through short passing and well-timed movement off the ball. Wright credits that system and his teammates with helping him as a distributor.

“I believe the other players enabled Arthur and I to have the season we did statistically. Playing with some of the players we played with made it easy to pick up assists and goals because their movement was second to none,” said Wright. “[Giraldo] allowed us to play with a freedom, which in turn brought the best out of all of us.”

Corpus Christi FC finished second in the Mid South Division, narrowly missing out on the playoffs despite playing top-notch soccer throughout the season. For Wright, that didn’t detract from a spectacular individual campaign. He broke the League Two assist record with 15 in just 14 games, including two contests in which he tallied a hat-trick of assists.

Wright found his scoring touch as well, bagging seven goals. By the end of the season, he had risen to 29th on the League Two Top Prospects list. A rising junior at Division II St. Mary’s University in San Antonio, Wright relished the exposure of playing for Corpus Christi.

“Playing in USL League Two was massive for me this year,” said Wright. “Coming from a small D2 school, I believe this summer gave me an opportunity to make a real name for myself. Playing against and with top D1 players week in week out was an eye opener for me, and made me raise my game in order to perform to the level I know I can.”

As Wright got forward to terrify opposing defenders, Rogers was the team’s linchpin in the middle of the park. Excellent at anticipating opposing players’ movements and comfortable in possession, Rogers’ knack for providing defensive cover and breaking up opposition counter-attacks allowed the team’s high-octane offense to commit bodies forward.

“My biggest strengths are my calmness on the ball, decision making and reading of the game,” said Rogers. “When playing I really never want to give the ball up to the other team, and so no matter the pressure on me I will do all in my power to keep the ball and play to a teammate.”

Rogers’ futsal experience with the England youth and senior national teams may be one reason why he excels with the ball at his feet in tight spaces. His 10 assists on the year in League Two were second only to Wright, and he chipped in four goals of his own too.

As he enters his senior season at the University of Texas Rio Grande Valley, Rogers spoke of how he benefited from playing in League Two.

“I feel as though [League Two] really allows a spotlight to be put on you, and shows you the level you need to be at in order to progress further in your career,” said Rogers. “If you are playing all summer you are going to come into your college season in great shape and potentially have a little bit of a head start on some other players coming back.”

For all their strengths as individuals, the partnership between Wright and Rogers allowed them both to flourish with Corpus Christi. Though they grew up near each other in the United Kingdom, the two had never met before playing together in League Two, where they quickly formed a connection.

“It’s crazy because I did not know Ollie beforehand, but we are from the exact same town,” said Rogers. “His friends are my friends and his parents are good friends with some of my family friends. Once we met, it was so easy for everything to click because of those familiarities.”

“We clicked straight away, on and off the field,” said Wright. “I’m proud to be able to call him a good mate of mine.”

Both players mentioned that their instant chemistry helped them become better.

“I think the fact that we both came from London over to Texas helped us combine our styles of play to help the team,” said Wright of his counterpart. “Arthur was without a doubt one of the best players I’ve had the pleasure of playing with, and he never let his standards drop, even in training.”

“Ollie is a player with such great talent,” said Rogers. “When I would see him isolated with a single defender, I would get it to him right away, I knew it would always be a dangerous situation for us. Just the trust I felt we had with each other, no matter the number of players around I know he’d be willing to give me the ball and that trust is massive in a successful partnership.”

The bond between Rogers and Wright translated to the rest of the team, who became a cohesive and effective unit. The Sharks scored four or more goals in half of their games this League Two season thanks to the efforts of the two Englishmen, and Giraldo sang the praises of the tandem off the pitch as well as on it.

“CCFC and specifically Ollie and Arthur were electrifying at times and watching them play gives me and many people great joy,” said Giraldo. “The impact they had on the youth here in Corpus Christi on and off the field will be felt for many years. I expect great careers from both of them at the professional level and feel honored to have been a part of their journey."